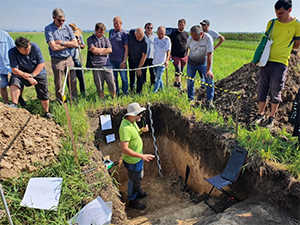 September 27th 2022 - The latest version of ISTRO info, the September 2022 issue, is available for download. In this issue:

The 2nd Central European ISTRO Conference (CESTRO) was organised as the second joint scientific Conference since the association of the national branches of the Czech Republic, Croatia, and Hungary was established. Simultaneously the event was the 8th International Conference of the Czech ISTRO branch.
The Conference took place in Brno in 2022 when the 200th anniversary of the birth of Gregor Johann Mendel is commemorated. G. Mendel, the father of modern genetics, whose ideas about inheritance were far ahead of his time, is one of the most famous scientists who lived and worked in Brno.
The conference was attended by 86 participants from 14 countries. A rich scientific programme consisted of 28 lectures and 30 posters presented over two days. Poster presenters were given the opportunity to speak for 5 minutes about their posters. While this was challenging for some young presenters speaking outside their native language they all acquitted themselves well and their performances stimulated subsequent discussions. (image: Vladimír Smutný)

Output of the conference: Conference Report, Book of abstracts (both documents: courtesy of Czech ISTRO branch)